Originally published at Ajarn.com on 27th May 2013

And no sooner has one approach been accepted and implemented than some other group of academics have picked the theory to shreds and called for a return to traditional learning. And it’s not just the ESL World that is subject to this merry-go-round. In the UK the Education Secretary, Michael ‘U-Turn’ Gove, has been at logger heads with educators over a wide range of policies to raise education standards by; scraping coursework, scraping GCSEs, introducing longer teaching days, shorter holidays, a greater emphasis on rote learning and a return to the educational philosophies of the 1950s.

But while some politicians and academics seem intent on change for the sake of change most educators would agree that there is a serious need to reevaluate today’s education systems. The actual structure of the modern education system has changed little since its conception during the industrial revolution of the 19th Century. We live in a world that is rapidly transforming and our students deserve an education system that is relevant to the 21st Century.

There has been much debate about exactly what a 21st Century Education should look like with academics producing long-winded articles packed full with migraine-inducing jargon… but not a lot of change has actually taken place in the classroom. The sad fact is that much of what is happening in the classroom today is no different to what has been happening for the past 50 years.

So how can we as educators prepare our students for a world we are unable to envision?
Clearly this is a question that cannot be answered overnight. So I hope you can forgive my skepticism when the Director of the school at which I work, Ajarn Varee Patravanich, introduced me to a 21st Century Framework which she believed would go some way to tackling these critical issues.

Well, the first thing I noticed was that this was an education framework developed by an American organization called 21st Century Partnership made up of academics, policy makers and prominent members of the business community. Now the idea of these collaborations between multinational companies and education policy makers generally fill me with dread … some kind of Orwellian nightmare in which schools create fodder to feed an insatiable capitalist machine. So you can imagine my surprise (and relief) on discovering this 21st Century Framework is not only clear and concise but it actually makes good common sense.

This 21st Century Framework can be summarized in a beautifully simple way.
Today’s learners need to develop the 3Rs + the 4Cs 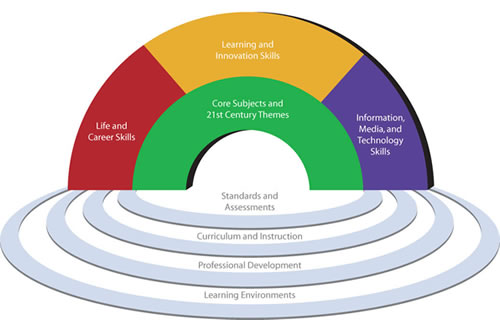 The 3Rs – Reading, Writing & Arithmetic
These have been central to education all though the 19th and 20th Century. In this Framework the 3Rs include all core subject knowledge, thus reinforcing traditional education.

The 4Cs – Critical Thinking, Communication, Collaboration & Creativity
When I first read these 4Cs I have to admit I was surprised…. I wasn’t expecting such great common sense. I mean these are educational concepts from the dawn of Western Education. The type of skills Socrates challenged his young student Plato to develop in the 4th Century B.C. And it’s not just the Great Greek Thinkers that valued these skills. Other great thinkers from Rousseau to Chomsky have argued that education should place a greater value on creativity and critical thinking.

Leaving behind the world’s great thinkers and moving forward to Thailand in the 21st Century lets consider why these skills are so important. Well firstly, how many people do you meet on a regular basis that make a living on their core subject knowledge alone? A far greater number of people rely on their ability to communicate, create, work in teams and solve problems. These are skills which have no ‘sell by date’ and from which our students can benefit.

So this 21st Century Framework is clear, concise, makes sense and it’s nicely packaged…this is beginning to sound too good to be true. The question now is how will it fare in classrooms across Thailand?

Well at Varee Chiangmai School were I work, it has made a promising start. The concept received a warm reception from over 40 English Teachers during a recent Professional Development Workshop. Many of the teachers explained that developing these 4Cs is good teaching practice which teachers should already be doing. Other teachers made the point that in Thailand where individual assessments and quantifiable scores are constantly demanded by parents, administrators and the MoE some juggling (and creative thinking) was going to be required on the part of the teachers.

One thing that I personally like about this approach is that regardless of whether or not your school adopts it, you can as teachers in the classroom help your students develop these vital skills through projects, activities, group work and student-centered learning. It’s something that you can adopt today to help your students prepare for the world of tomorrow and surely that’s a good reason in itself….

If you want to know more about 21st Century Education, I suggest you watch the following video